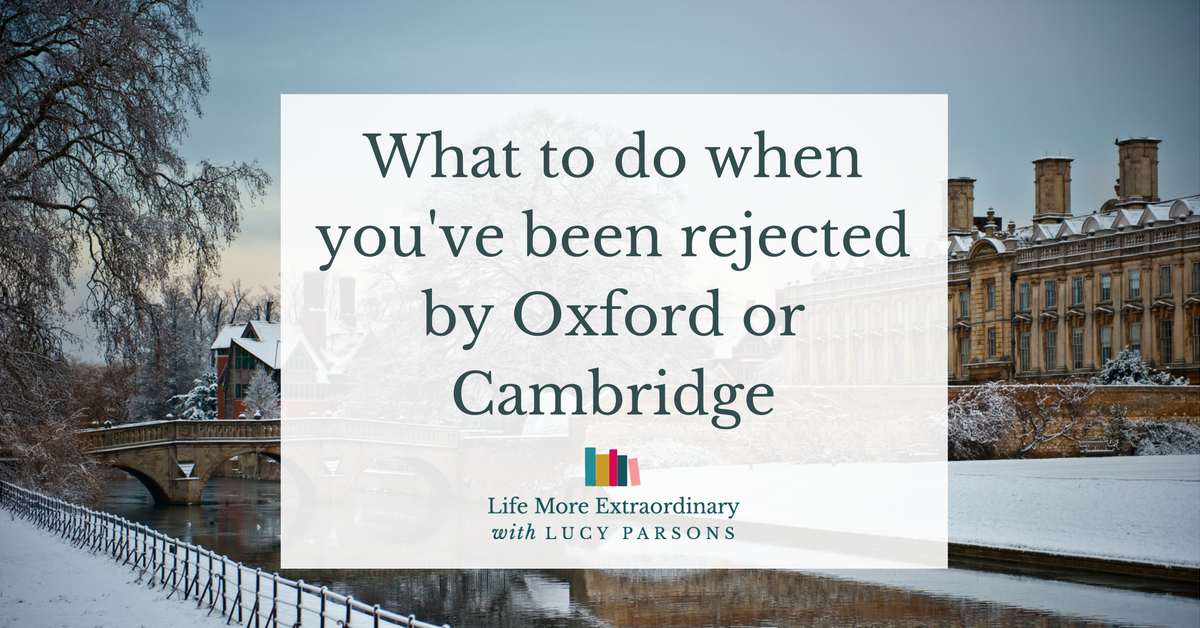 When you apply to Oxford or Cambridge you expose yourself to the very great risk that you will be rejected. The ratio of the number of applicants to the number of places means that you'll probably be in the 75% or more of applicants who are rejected. Some will have their hard work and intelligence rewarded and been offered a place. All the others, unfortunately, will be rejected. This is painful. Horribly painful when you've set your sights on such a grand ambition and poured every waking moment into trying to make it happen for months, if not years before.

Here, I hope to offer you some advice on what to do when you've been rejected by Oxford or Cambridge.

Option 1: Grieve, accept and move on

I know that when I was applying to Cambridge my goal of getting a place became part of my identity. Almost every waking moment was dedicated to getting the grades, doing the further reading or bringing myself up to standard for some other aspect of the application. When you get that rejection letter it feels like someone has ripped your personality apart. There's no empathy or sorrow from them. It's just a no, and it hurts.

When you realise you've failed to get into Oxford or Cambridge you should first take the opportunity to grieve. Cry into your pillow. Rant and rave. Maybe even throw something (though don't throw it too hard and make sure it's not too big and heavy).

I've known some very wise Oxford ‘rejects' who have taken the attitude to just accept it and move on. This subscriber of mine wrote to me in the summer and said:

I didn't get an offer from Oxford and they didn't send me any feedback which is a shame! I really enjoyed the three days there even though they were stressful but maybe it just wasn't meant to be 🙂 Thank you for your help with my application, if it weren't for you I might not have been able to experience Oxford life – even if it was only for 3 days!!

This girl was able to be philosophical enough to realise that she'd been lucky to experience Oxford life for three days and was looking forward to going to another excellent university. She realised, in the end, that this other university was probably better suited to her talents and personality, and I actually agree.

I personally have always taken the philosophy towards interviews and applications of any kind that the outcome, whether it's a yes or a no, is probably the right decision. The admissions tutors and directors of studies at Oxford and Cambridge are very experienced at spotting who are the best candidates to make the most of the opportunity of a place. If they don't see in you what they're looking for then it's probably for the best that someone else who is better suited is offered the place.

At the end of the day, Oxford and Cambridge are not the be-all and end-all. There are other truly excellent universities out there and there are so many other ways to make the most of your talents. If I'm really honest, I learned more in my first job that has been useful to me in the years since, than I did in my three years at Cambridge. I was working alongside graduates from other top UK universities and they were just as a bright and talented as me. And, if they don't want what you've got to offer, then they're not the right place for you.

Last summer a young man came to me who had been rejected by Oxford. He had been to a school where over half the sixth form applied to Oxford and Cambridge and many of them were offered places. However, to make matters worse, he'd been rejected by every other university he'd applied to. He felt distraught, his confidence had taken a total bashing and he just didn't know how to make sense of it (he'd got A*A*B at A-Level which is pretty darn good).

He wanted me to help him reapply to Cambridge. The first thing that we needed to do was get to the bottom of why he'd failed to get places at any of the universities he'd applied to, let alone Oxford.

The big problem was the B. Watching a number of students apply over the last couple of years I've seen how one sub-standard grade (i.e. a B, even at GCSE level) can be your downfall in an Oxbridge application. This is particularly relevant if it's in one of the core subjects like maths or English.

The other problem for him was that he'd performed poorly in one of his interviews.

If he wanted to apply to Cambridge as a second chance he basically needed to do three things:

It was up to him to decide whether he wanted to put himself through all this again.

I've met people in my time who've been rejected by either Oxford or Cambridge, applied to the other next year and been rejected again. This is tough and you have to be sure you can take two rejections if you're going to expose yourself to that possibility. I've also met people who, after having been rejected in year 13, have reapplied with truly excellent A Level results (e.g. A*A*A*) and then been accepted.

When you're applying to Oxbridge there are no guarantees. No one can tell you you're a dead cert. There's no such thing.

Basically, you have to decide how much this is worth to you and whether you can take two rejections. If you can't, revert to option 1 and grieve, accept and move on.

How I can help you

There's nothing that I love more than working with incredibly ambitious students who want to get into Cambridge or Oxford University. I'm now offering a service called The Oxbridge Evaluation where I:

If you're interested then check out the details for The Oxbridge Evaluation.

You are not a failure

If you have been rejected by Oxford or Cambridge I want you to know that you are not a failure. In order to be good enough to even consider applying to these ancient and elite universities, by definition, you're a success in life. You're either predicted or have already achieved superlative grades, you're an intelligent and engaged reader outside of school, you actively give back to your community and you have a very bright future ahead of you. Stand tall, be proud and realise you're a valuable and wonderful human being whatever university you go to.