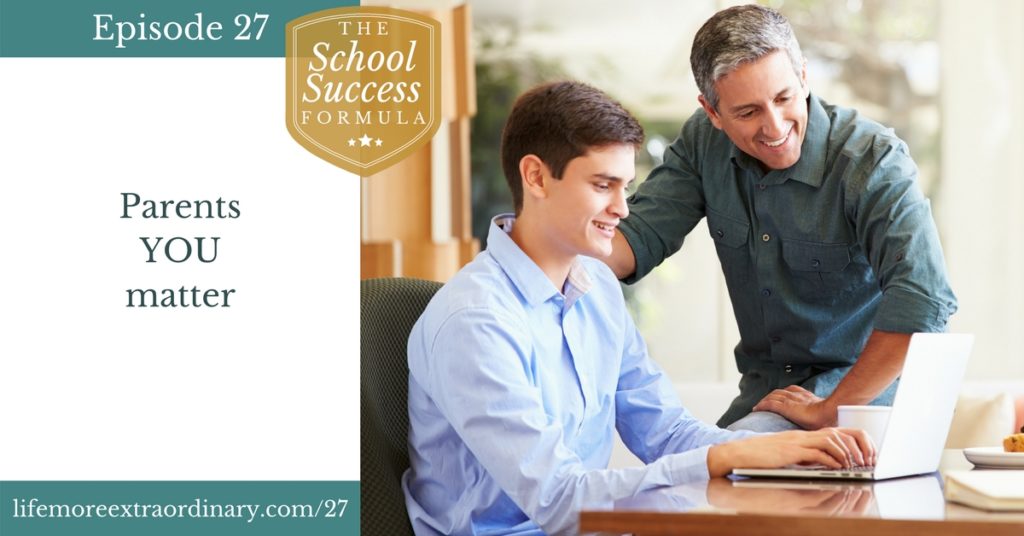 We're drawing to the end of 2017 and I wanted to put together a podcast reflecting on what I've learned, through my business, over the last year. I thought of calling it my Christmas message, a bit like the queen, but that felt a little bit presumptuous. But, it is a message that I hope you, as a parent of teenagers, will sit up and listen to and take seriously.

What I've discovered this year is that parents really matter. Now, you might be thinking ‘D'oh! Lucy, of course they matter.'

I kind of knew this on an intellectual level before the beginning of 2017, but now I've been shown the depth of how much you, as a parent, matter.

When I first started my website and blog back in March 2015 I wanted to create a resource for students. Specifically, I wanted to help students just like I was when I was taking my GCSEs and A Levels: ambitious young people who wanted to work hard and really develop and grow through their education.

Students loved my blog but something that I expected to happen didn't happen. When I created products and services, like my book and my coaching, that were meant to help students more deeply than my weekly blog posts, very few people wanted to buy. I had assumed that ambitious students would ask their parents to pay for things to help them with their education, as my parents would have done at the drop of a hat, but that wasn't the case. I still have students coming to me saying things like, “My parents won't buy your book for me.” This really makes me sad. I think it's particularly tragic that when a student actually wants to work hard and do well their parents don't want to support them with their education. And, it's going to be so much harder for these students to succeed.

To tell the truth, I was beginning to lose faith in the parents of modern teenagers.

The power of supportive parents

But this year, I saw the power of supportive parents. When my book, The Ten Step Guide to Acing Every Exam You Ever Take, was published and featured in The Telegraph in February parents started flocking to me asking to pay for my support for their children. These were parents who cared deeply about their children's education and were willing to do what it took to make sure that their education was a success.

My faith was restored.

As my Facebook group for parents, the Supportive Parents, Successful Students community, grew through the year I began to hear how anguished and stressed parents were by their children's educational fortunes. I knew that parents felt this way from second hand articles and anecdotes, but this was the first time that I was faced with it. The pain, desperation and stress of parents was very, very real. They wanted to do everything they possibly could to support their children but also felt disempowered by teenage children who shunned their help or just grunted when they asked, ‘How's the revision going?'

Exam results are not a reflection of your parenting

This became even more real to me when a student who I worked with for a one-off session in the build up to his A Levels received very disappointing A Level results. He'd been given an unconditional university offer and had just taken his foot off the gas when it came to revision – an hour with me wasn't going to reverse the rot of several months of very half-hearted results.

I had emailed and spoken to his mother several times and I could tell how stressed she was and how difficult she was finding it seeing her son squander his chances of good A Level results. When the results came she was very, very upset. She said that she couldn't help but think that people were judging her parenting because of her son's poor results.

He bounced back quickly and is enjoying university life. The mother said that it would take her many months, if not years, to get over the disappointment.

The importance and limits of parenting

All of these experiences gave me the idea for my study skills course for students and parents, The Exam Success Formula. I could see that parents needed help, guidance and support as much as their children did.

As the course unfolded it became very clear to me just how powerful it was to work with parents and students at the same time. Some parents come to me because they want to outsource the exam support part of their parenting to me. What I found, though, was that the course was more powerful because it brought students and parents together. The discussions and insights that both students and parents were gaining about each other through the course were priceless. In the week on mindset, one mother, whose son wants to be a vet, learned how her son was scared to fail and that led to him pulling back on his efforts to do the best he possibly could. Previously, she hadn't been able to understand it when he withdrew in this way, but now she could and she could talk him through it.

Other parents reported how they had completely stopped nagging and were having very positive conversations about revision plans and the future every single day – monosyllabic teenage boys were opening up to their parents in a way they never had before.

I seemed to have found the key to showing how parents and teenagers could work together to achieve amazing things in their education and it was magical to watch. I am convinced that the course would not have been so powerful if it had only been for students; parents had to be in on it to be their child's biggest cheerleader, their everyday coach and their rock-solid support.

But then, on the final parents only coaching call of the course it was brought home to me that there were limits to the role of parents.

One mother came along to the call to talk about her son. He wasn't the child that she had enrolled on the course, but he was the one causing her the worry.

When I looked at this mum, through my computer screen on the video conferencing call, I could see the tension in her face and body. Her shoulders were hunched up high, near her ears, there wasn't a hint of a smile on her face and her voice was full of desperation.

Her son hadn't peformed brilliantly in his GCSEs and was now on a sixth form course. He really wasn't doing the work. The mother reeled off the things she'd done, or was considering doing, to help him to get the grades. Most of these things involved signing him up for one course or another. What she didn't seem to be able to see was that her son wasn't going to get any benefit out of these courses while he had this short-term, today-focused mindset and while she was shouldering all the responsibility for his success. This mum could do a lot, but she couldn't study for her son, let alone take his exams.

After this coaching call another parent wrote an email to me to say that she'd watched the video recording of the call back and it had given her a moment of realisation: she too had been taking on the responsibility for her daughter's success or failure and was staggering under the strain of it because her daughter had been pushing back and refusing to take on this responsibility herself.

For the sake of your child's success, and your well-being, you have to realise the limits you have as a parent.

This isn't easy, I know. When your baby has come out of your own body they feel like, and they are in a way, and extension of you. When you've been through a period in your life when you've done every single little thing for them it is hard to know when the right moment is to let them go and allow them to take responsibility for their fortunes. But this point has to come before your child reaches the end of year 11, otherwise they're not going to face up to their exams and take them seriously.

The best thing you can do as a parent

There are so many, many things that you can do for your children as a parent. I'm still relatively early in my parenting journey and I'm sure I'm going to learn so much more about this as the years roll by. But, what I've learned about parenting this year is:

I outlined the main areas in which you can support your children to educational success in episode 2 of the podcast, What Makes a Supportive Parent? If you're interested in the specifics I highly recommend you go back to that episode.

Do you need my help?

If you think you need my help in supporting your child in the best way possible to exam success then the best way I can help you is if you sign-up for the next round of my study skills course for parents and students, The Exam Success Formula. It starts on 20th January. The early bird price is available until 9pm on 24th December, after that the price will increase by £50.

The podcast is six month’s old! Leave a review to have the chance of winning a signed copy of my book

This episode marks the six-month birthday of this podcast, The School Success Formula. To celebrate I’m giving away three signed copies of my book, The Ten Step Guide to Acing Every Exam You Ever Take. To win a copy leave a review of the podcast before midnight on 3rd January 2018. I will pick the three winners on 4th January and announce them on the podcast episode on 10th January 2018. You will need to contact me with your postal address to receive your copy of the book.

If you already have a copy you might like to give that copy to your child’s school library or to a friend so that you can keep the signed copy.

How to leave a podcast review on iTunes

Click here to find out how to leave a review in iTunes on your desktop.

How to leave a podcast review through the Apple podcast app

My book, The Ten Step Guide to Acing Every Exam You Ever Take.

If you’d like to suggest yourself as a guest for the podcast, please complete this form.