Why I’ve applied to do a TEDx talk 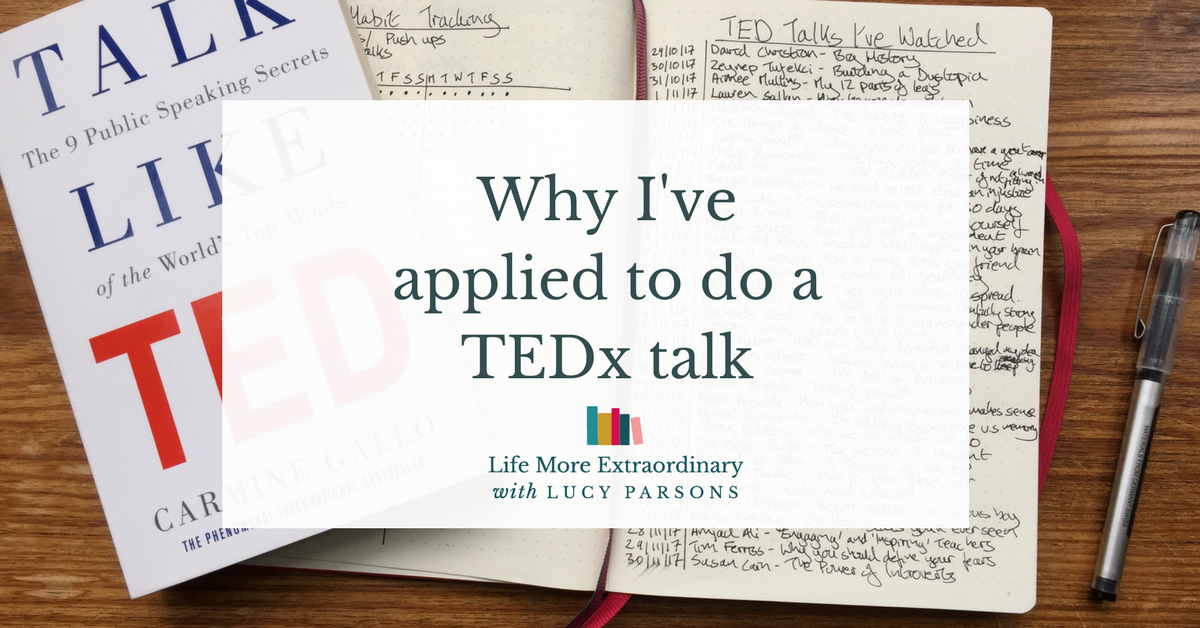 This autumn I've applied to do not one, but two, TEDx talks. I've got my fingers crossed that one of them will say yes, whilst at the same time being slightly nervous about what I'll do if both of them say yes.

I wanted to blog about my TED journey and what it teaches me. There might only be two blog posts in this series – this one and the one where I talk about my rejections, but there might be many more posts if I'm accepted.

Some people hate public speaking. I'm not one of them. I've always loved it. As a child and a teenager I used to dream of being an MP and making big speeches in the House of Commons and at political events. I've since realised being an MP isn't for me, but I still love to speak.

In my first week at Cambridge University I went to the fresher's event at The Cambridge Union Society (the renowned debating society). The place was packed – there were so few seats that my friends and I had to sit on the balcony. As I looked down into the debating chamber and saw second and third year students debating with their slick arguments and quick wits I felt like I had finally arrived in my ideal world – a world that I hadn't fully realised I existed.

Since Cambridge I have indulged my love of public speaking firstly by giving presentations in my first corporate job then, I became a teacher which basically meant that I had to give four or five presentations every day.

Since I've been running my own business it's been a dream come true that I've been paid my schools around the country to speak to their students – to motivate and inspire them. The two most memorable speaking events I've done in the last year were my talk at The Festival of Education where the room was packed and people were standing in the corridor trying to listen in, and the assembly I gave to several hundred GCSE and A Level students at JFK School in Hemel Hempstead.

But, TED is the big one. TED is the biggest public speaking stage there is, unless you're a world leader. And, some TED talks have probably had more views than many of the speeches given by the most famous world leaders of our time.

Doing this feels like it's something I have to do in my life. It's like writing a book; I'll have failed my own potential, and the rest of the world, if I don't do this.

Which TEDx events have I applied to?

I have submitted applications to TEDx Newnham (that's the college where I studied geography at Cambridge University) who are holding their first ever TEDx event in February 2018. The other one is TEDxNorwichEd – which will hold it's third event in April next year and is focused on education.

I've been aware of TEDxNorwichEd since it began as my friend, Leah Stewart, was involved with it's organisation since it's conception. I didn't apply last year because the event was in the same week as my book, The Ten Step Guide to Acing Every Exam You Ever Take, was published and I didn't think I could manage both at the same time. However, it's worked out quite fortuitously this year as the theme is perfect for me: it's ‘Dream Big'. If you're a regular reader of my blogs and emails you'll know that I'm all about dreaming big.

It would be a huge honour if Newnham selected me. I'm sure there will be some big names from the college who also apply – I'm thinking Mary Beard and the former principal Onora O'Neill (who has already done a TED talk). If I'm chosen to speak alongside people like them I will really have to get my act together!

What do I want to speak about?

I'm not going to share the details of my applications at this point in time. TED's tag line is ‘Ideas worth sharing' and one of their rules is that what you talk about on stage can't have been shared in that form anywhere before. So, I'm playing it safe at the moment! I can tell you the themes: Newnham's is ‘Embracing Challenge' and Norwich's is ‘Dream Big'.

What I've learned along the way

If I'm honest, I filled in the TEDx Newnham application in a bit of a rush on the last day that it could be submitted. I'm not expecting them to say yes, because I didn't give the application the care and attention that it warranted.

However, with the TEDxNorwichEd application it was a bigger deal for me. Educators are my audience and I knew from the event's history that their production values were high. Not only that, I knew Leah and had met Jaz Ampaw-Farr through Leah who did an absolutely stunning speech at last year's event. I knew I had to get this application right.

During October half-term the organisers of TEDxNorwichEd did an application masterclass on Facebook live. The two guests, who had been speakers last year, Jaz and Marianne Cantwell, both said how helpful my friend Leah had been with their applications. I wrote to Leah and said that I needed her help.

Leah and I had a Skype call one Sunday afternoon and she made me dig really deep into my idea and the topic of ‘Dream Big'. Here are some of the things that I learned about myself as a result of that conversation:

In essence, starting this process of being a TED speaker made me face up to fears and limiting beliefs that I've held for nearly two decades. They've been holding me back from being the truest and fullest version of myself. This is something that I see many of the students that I work with doing as well – and I want to challenge you to be really honest with yourself. How are you holding yourself back?

What if I get rejected?

If I get rejected that's absolutely fine. It means that my idea wasn't right for these two events, or, in the case of Newnham, I just needed to put more into it. To me rejection won't be a sign that I'm not meant to do this. It will just mean that I need to go away and do more work to turn me into a TED-worthy speaker.

I know that I have it within me to be a TED speaker. How do I know this? Because, since 29th October I have watched at least one TED talk every day. Some of them are truly astounding, thought-provoking and memorable and it will be a tall order for me to live up to their quality. However, some that have been watched millions of times, I believe, aren't that great and I can see already how I could do a better job.

I will keep watching and studying to make my dream of being a TED speaker come true.