Concerned about fitting in at Oxford or Cambridge? Don't be… 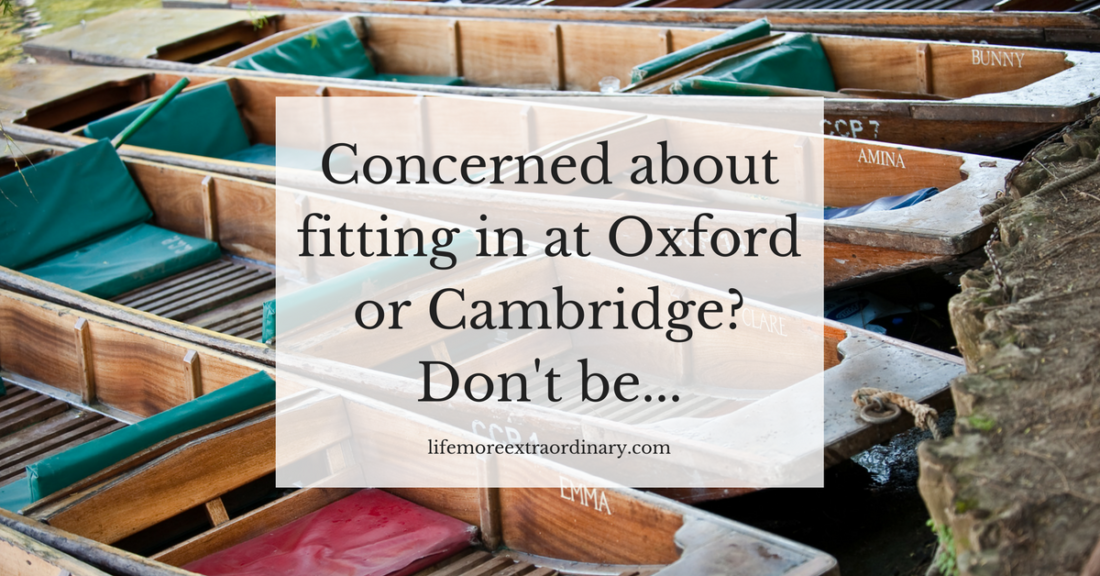 Just after A-Level results day this year I had an email from a reader of my blog who’d earned straight A*s in her exams and was off to Oxford to study Philosophy, Politics and Economics. However, she was worried. This is what she said:

I’m just scared I’m not going to fit in or live up to my classmates and university expectations. I’m not from a rich family I’m just a normal girl, who got there with good grades, yes my Dad brought me up but he brought me up to work hard for what I want.

I know this is mostly based on stereotypes but it’s a genuine concern of mine.”

These are very common concerns for people from normal backgrounds, with normal families. The Oxford and Cambridge stereotypes really don’t help put you at ease – the posh boys from expensive schools larking around in dinner jackets drunk on champagne.
However, I can tell you from personal experience that this stereotype is very wide of the mark.
If you’re considering applying to Oxford or Cambridge, have already applied and are either waiting to hear if you’ve got an interview or to see if you’ve got the grades then this blog post is for you.
That’s because it’s really important that you get your head sorted on these issues so that you don’t have a chip on your shoulder or feel like you’re already at a disadvantage before you write your personal statement / go for interview / turn up for your first day.

Vintage port or tea and toast?

Yes, there are a certain number of posh boys larking around with a bottle of port waiting for a late night party in their room. However, this is not the norm.
For me and my friends at Newnham College (90% of whom were state school educated) you’d more commonly find us having tea and toast at midnight that expensive alcholic beverages. We’d while the hours away talking about the issues that were important to us (anything from the latest government announcement to the cutest guy we’d seen that evening).
The wonderful thing was, I actually got to experience both the vintage port and tea and toast scenarios. My favourite was definitely the tea and toast, but meeting the posh boys was all part of the rich and varied experience of being there.
Vintage port or tea and toast? What's your Oxbridge style? Click To Tweet

“I’m not rich enough to go to Oxford!”

You don’t have to be rich to go to Oxford or Cambridge. In some ways, these universities are better able to look after less well-off students.

While I was at Cambridge I received lots of different grants and bursaries. The largest amount of money came from a fund to support students from families on lower incomes. I also had book grants and travel grants that enabled me to travel to Portugal, Italy and America during my time at university.

Every year Oxford and Cambridge colleges put huge resources into raising funds to support students who are less well off through their university years – the emphasis here is on inclusion on merit. They don’t want anyone to have to turn down a place because they can’t afford it. Only the other day I was ‘phoned my a current Newnham student asking me to donate to their annual appeal. She was from a lower income background and has benefitted greatly from the college’s financial support.

Yes, there are expensive events at both universities, like Cambridge’s famous and fantastic May Balls. These are part of the experience, if you’re lucky enough to get a place, and I’d urge you to splash out just the once (even if you’re on a very tight budget). It’s worth it, I promise you!

“Am I clever enough for Cambridge?”

Loads of Oxbridge applicants and students suffer from imposter syndrome. They believe they’re the one who was offered a place in error and that they’re not nearly clever enough to survive. They’re constantly looking over their shoulder just in case they’re ‘discovered’ and asked to leave.

All I can say to this is: trust the system. You’ve been through (or are going to go through) a rigorous application procedure where the universities will consider:

If you’re offered a place you are clever enough.

“I’ve always wanted to go to Oxford. Will it live up to my expectations?”

If you go with the right attitude you will have the time of your life. You need to work hard, striving to get the most out of the extraordinary learning experience you’ve been offered, and play hard to make the most of the people and opportunities there are there. If it’s a let down, I hate to be harsh, but it’s probably your fault.

While I was at Cambridge I made the best friends I’ve ever had. I also met the friends who introduced me to my husband. I met famous politicians, celebrities and accomplished people at the Cambridge Union. I used travel grants to see other parts of the world. I made the most of my time there.

As I was writing this article I thought I’d get back in touch with the reader who I quoted at the beginning to see how her experience of Oxford was turning out after all her worries. She’s in her third week there and this is what she said:

“As I asked in the summer I was worried it would be full of posh and rich kids. It’s not and the ones I’ve met aren’t snobbish. Being in the groups and societies has massively helped me. We all have the same interests so something in common to talk about.”

As you can see, by throwing herself into Oxford life this student has found a common bond with her fellow students so that she can see beyond the accents and the clothes. This is what you need to do when you get there.

Open your mind to the opportunity

Once you’ve read this post I want you to start altering your frame of mind. Throw away your prejudices and understand that if you’re one of the chosen ones, lucky enough to be offered a place, you’re right for either Oxford or Cambridge University. Once you’re there you’ll get out what you put in. Be open minded throughout the application process and while you’re settling in and you’ll show yourself to your best advantage – ready to have the time of your life.

Do you have any questions or concerns about applying to Oxford or Cambridge or fitting in once you’re there? If you do, leave them in the comments below and I’ll be sure to reply.

Want more information about applying to Oxford and Cambridge? Check out my Get into Oxbridge resources page. Enjoy, and good luck!

Back to School Mindset reset