University is priceless: why you can’t put a price tag on a university education

I can’t stand it when people bang on about the price of university, whether it’s the media, parents and students or some of my lovely readers. I get it, money is very real. It buys you important stuff like food, clothes and a roof over your head. However, there are some things in life that you just can’t put a price tag on. I think a university education is one of them.

Don’t get me wrong, there was a time that whenever an account statement from the Student Loans Company landed on my doormat I had a meltdown. Sometimes it would last for days. My husband would have to tip-toe around me wondering when I’d snap out of it.

But then I realised it was only money and in all probablity I’ll never end up paying it all back because I won’t be earning enough. Debt written off. Lovely.

One thing I’ll tell you though, however much interest I end up paying on that loan I know that it was worth it. Even if I’m not earning £500 per hour in a city law firm. 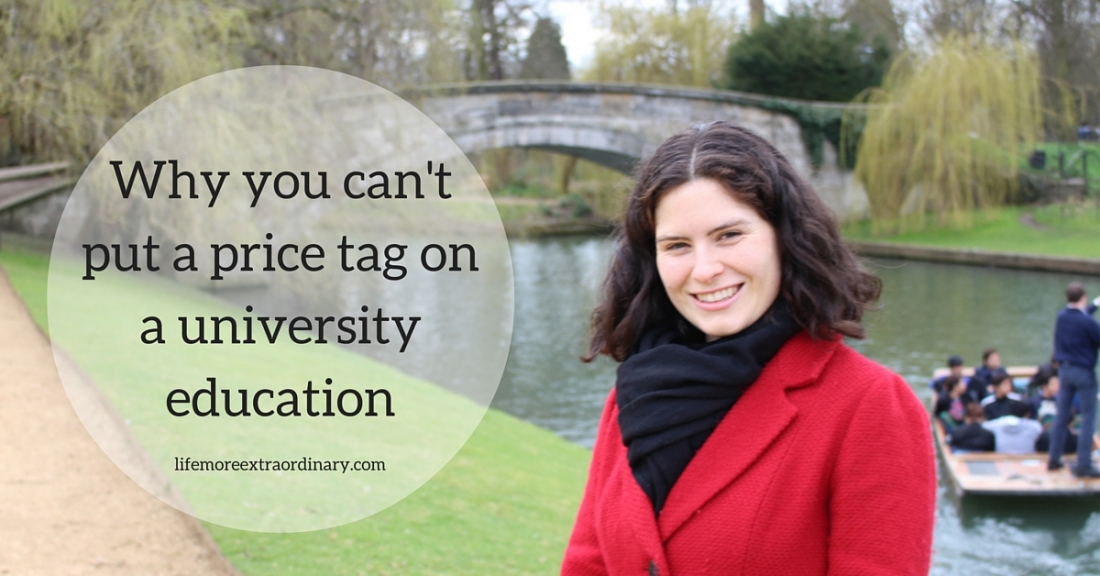 Why you can’t put a price tag on university

Before I delve into this I should give you some background. Sorry if you’re a loyal reader and you already know this stuff about me – I love you though!

I went to my local village primary school and two state secondary schools. I decided at the age of nine that I wanted to study at Cambridge University and I made it, having earned 5 A grades at A-level. I studied Geography at Newnham College. I then had a corporate job for three years (where I nearly paid off all my student debt) before training to teach and having to take out another student loan – I was back to square one with my student debt, all in the name of public service. D’oh.

I tell you this not to show off, but to put the following points into context. I’ll come back to this at the end…

These are the reasons why I think a university education is priceless.

Recently I went to a friend’s wedding party. He studied geography with me at Cambridge and was my first flat mate when I moved to London as a brand new graduate. He’d got married in Las Vegas in January and was now having a party with friends and family to celebrate.

There was a group of people there who had all studied Geography together in the same year. Many of them I hadn’t seen for years and years. However, as soon as we saw each other the conversation flowed easily. It wasn’t the awkward small-talk I often suffer with other people. This was genuine, good conversation that entertained me and made me feel good about myself.

I can also remember going to my niece’s 21st. She also went to Cambridge and sat me and my husband on a table full of Cambridge grads. Again, the conversation was very interesting and very easy. I was with my people.

It comes down to this: when I walk into a room full of people who went to Cambridge I feel more at ease and at home than anywhere other than with my nearest and dearest family. We just kind of get each other. We don’t labour the small-talk but get straight to the deep and meaningful issues that Oxbridge graduates love to sink their teeth into.

These are my people. They get me and I get them. Our brains have been trained to think in similar ways and we have foundational experiences that are the same.

When you go to the right university for you you’ll find the people who bring out the best in you and make you feel comfortable in your own skin. Imagine spending three years with these people and then having them to go back to as your friends for the rest of your life? I think that’s priceless.

At univerity you find your tribe - people who you get and get you. That lasts a lifetime and is priceless. Click To Tweet

You’ll learn how to think 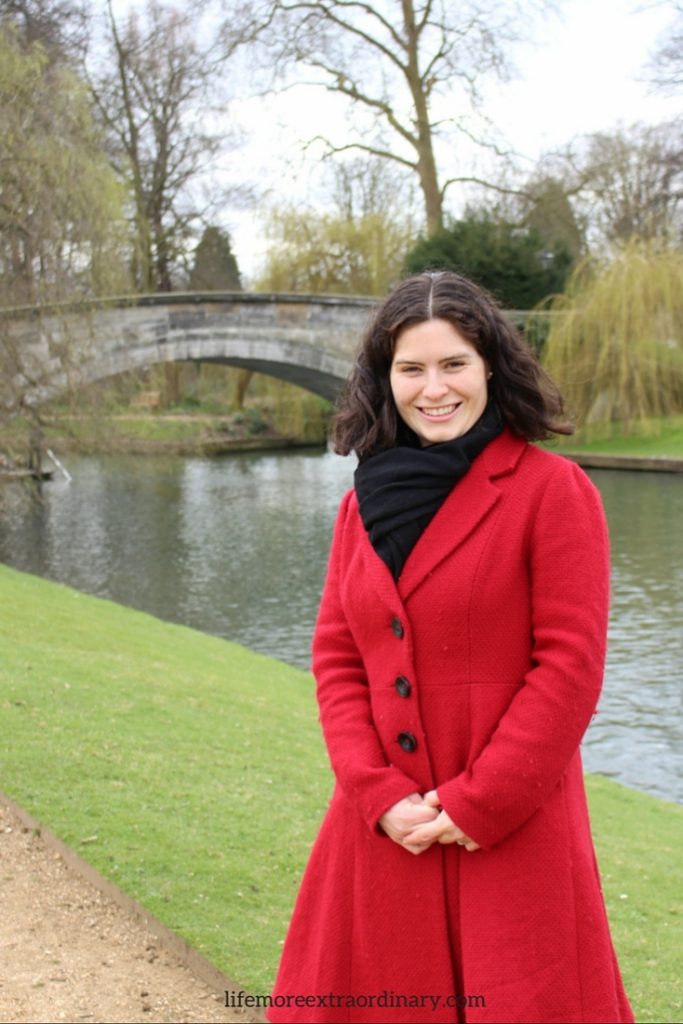 Me next to the River Cam in Cambridge – site of many happy days!

You might be thinking, well, “Lucy, of course I can think, I’m a human being.”

Well, until you’ve been to university (unless you’re a very exceptional young person) you don’t know what it is to really think.

What do I mean by really thinking? Well, it’s about developing a critical mind that analyses things objectively from all angles. You don’t just accept opinions or facts without examining them first.

There are people who’ve managed to learn this without going to university, but they’re people who’ve truly gone to the university of life. By this I mean that they’ve read thousands of books, met many brilliant people and thought deeply on many topics. An example that springs to mind is John Humphrys, presenter of the Today programme on Radio 4 and of Mastermind.

Until you've been to university you don't know what it is to really think. Click To Tweet

This ability to think is something you don’t miss when you haven’t got it because you don’t know what it feels like. However, I can assure you that it feels amazing to sit in a room full of people and be the first to get to the very heart of the matter and you know you’ve done it because of your years of learning and mental drilling at university.

You’ll learn to be independent

It’s all very well getting A-mazing grades in your A-Levels when you’ve got your mum cooking your evening meal, doing all your washing and ironing and acting as your taxi service.

It’s quite another thing learning to live independently and responsibly while you’re studying for a degree. This ability to be independent is so important for your resilience and credibility as an adult human being as you go through life. The beauty of university is that you can learn all this in a safe environment.

Living independently at university develops your resilience and credibility in a safe environment. Priceless. Click To Tweet

When I was at university I was the treasurer of the famous debating society The Cambridge Union. Every Thursday there was a big debate where famous and accomplished people would come and present their point of view. I met many MPs ( for example, Michael Howard, former leader of the Conservative party), lawyers, actors (the guy who playing Joe Mangle in Neighbours) and journalists (editor of Elle magazine) there. I heard many others speak including Stephen Hawking, the world renowned physicist.

I saw other people ploughing the path to their professional careers while I was there too. Chris Mason, BBC Political Correspondent, studied Geography alongside me. He worked on the student newspaper and in student radio. Others forged political careers, two of my peers becoming Members of Parliament in the 2015 election having been active in student politics while I was at Cambridge (Suella Fernandes and James Davies).

Less impressively (and with no name drops) I also went on a geography field trip to Portugal where we all did T’ai Chi in the mist on top of a mountain, ate the most flavoursome and juicy oranges straight off the tree and saw the point from which the major exploration of the West African coast was launched. This trip was subsidised by the university only costing me £125!

There was also the time we punted to Grantchester on a magical summer’s evening by candle-light. Oh, and the time I stayed up until dawn after a day-trip to the seaside talking with friends in my college gardens about everything and anything (we were supposed to come inside at midnight, this was about as far as my rule-breaking went!).

There is no playground for the young other than university that offers these kinds of experiences.  And they’re not just on offer at Cambridge and Oxford. The thing about student life is that you can create these opportunities for yourself, and the more go-getting you are the more of these opportunities come your way.

University is unique in that it offers the time, space and meeting of minds to create extraordinary opportunities. Click To Tweet

Have I convinced you?

University is what you make of it. You can feed on the memories and the opportunities you created there for the rest of your life. For me it was worth every penny of debt and interest that I have to pay.

However, I will give you a word of warning. Not all universities are created equal and not every course is as good as the others. You really need to do your homework when you’re choosing which universities to invest your money and time into. Going to open days and asking lots of questions will let you know whether you’ll fit in and if the course is right for you. Don’t waste your time and money on low-grade courses or institutions.

I met my husband as a result of going to Cambridge. He was there at the same time as me but we didn’t meet until two years later when we were introduced by a mutual friend.

I have Cambridge University to thank not only for some of my most enduring friendships but also for my marriage (we’ve been married for almost nine years) and my two beautiful, clever, funny and sweet children. You can’t buy that anywhere.

Are you worried about the cost of university? What makes you think it’s the right place for you? Have I convinced you that it’s worth the money? Leave a comment below to let me know what you think.

What’s the difference between personal statements for vocational courses and academic subjects?

3 Personal Statement Mistakes to Avoid to Get University Offers

Help with achieving your goals this Christmas holiday

When should you write a UCAS personal statement?

What is a UCAS Personal Statement?