[65] The truth about motivation 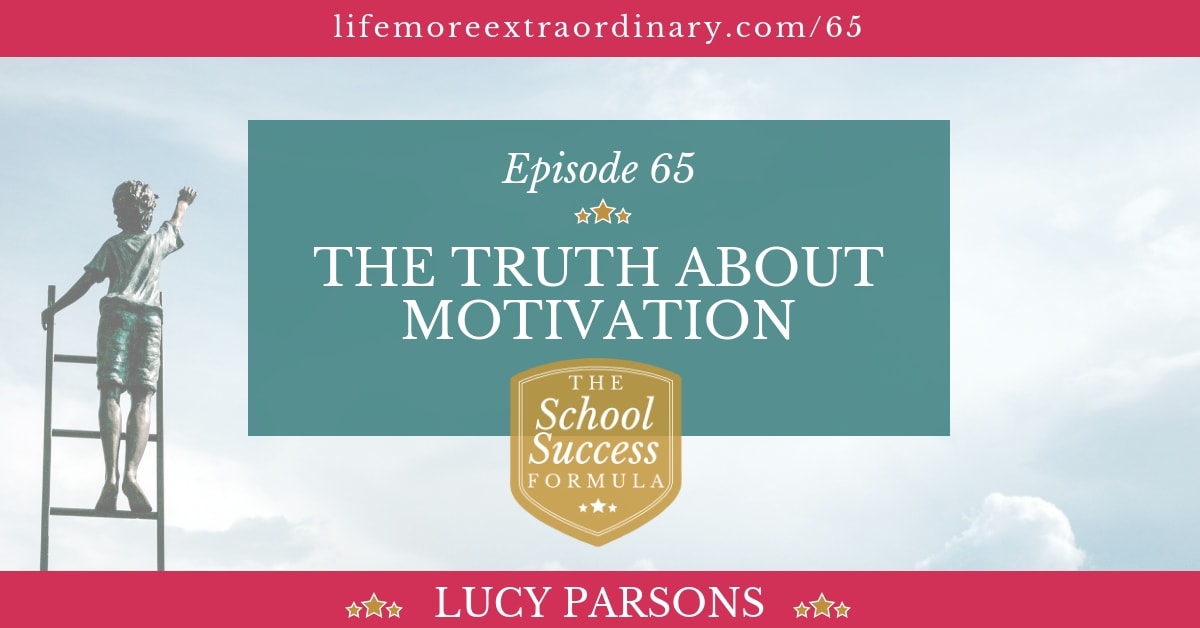 One of the most frequent complaints I hear from parents is that their children aren't motivated to study for their exams.

Funnily enough, I also hear the same thing from students, with increasingly desperate emails landing in my inbox the closer and closer we get to exam season.

Keep reading to find out more…

When people complain to me about a lack of motivation there's often something else behind it, and it's worth talking about this briefly before we dive into the truth about motivation.

I see motivation as a desire to do well, or to work towards a certain goal.

Motivation is the desire to do well, or to work towards a certain goal. Most people don't actively want to do badly, so if someone's complaining about a lack of motivation, there's usually something else behind it. Click To Tweet

Most people don't actively want to sabotage their own success, so in a lot of cases when students in particular are complaining about a lack of motivation that's not really what's going on. They do, very much, want to do well and they have clear goals. They just can't make themselves get up and get on with what they need to do to achieve their goals.

What is more likely to be going on is one or more of the following:

There are lots more reasons why a student might not be doing the work, other than a lack of motivation. I actually wrote a whole post going through nine of them. I strongly suggest checking out episode 22, Why your child isn't revising and what to do about it.

If you've checked that out and you're still of the opinion that motivation is the real problem, read on.

What's behind a lack of motivation?

When we're talking about a lack of motivation to study for exams, there is usually one of two things going on.

Parents, teachers and mentors can help with both of these things.

Connecting the dots between these exams and their future dreams

Inside The Extraordinaries Club, I've got a series of exercises that help students to articulate what their dreams and goals for the future are, and how the exams they're studying for will help them to realise these dreams.

The problem that I see most adults perpetuating is saying to a child, “You need good grades so you can get a good job.”

This really isn't specific enough to tap into a young person's motivation. And, what is a good job anyway? To you, it might be decent pay, security and a pension. To a 15 year old boy, it might be the opportunity for world travel, excitement and adventure. The other thing to consider here is that many of the jobs that our young people will be doing in the future don't even exist yet. My job didn't exist until I invented it for myself.

The exercises I share inside the club encourage students to not only think about the type of work they're interested in, but also in the lifestyle they aspire to. This is often more concrete in a young person's head than work. After all, they have experience of living in a house, what kind of entertainment they enjoy and the kinds of social activity they love. They don't yet have experience of real-world employment so it's hard for them to relate to this. And, teenagers' lifestyle desires are often quite aspirational, so they'll have to make the link between how much they need to earn to pay for this lifestyle – which will inevitably mean that they need higher grades.

If you'd like your child to work through these exercises you can sign-up to The Extraordinaries Club here.

Reducing the overwhelm and increasing confidence

If your child just looks at the world and feels overwhelmed with the possibilities and no great connection with any one particular goal, this is not at all unusual.

I went through a phase in my twenties when I really didn't know what to do with my life. I tried a corporate career, but it just made me miserable. I trained to be a teacher but I felt like I was playing small in my life. I knew I wanted to get married, have a home and a family and that seemed enough for a while.

But, when I discovered the online business world my ambition was unleashed. I could see how all the things I'd dreamed of doing when I was a teenager could fit together. I could write, I could be a speaker, I could make a name for myself and even appear in the national press. I could also do all of this while making a real difference in the world about something which I've always been passionate about: education.

When I look back, I can see how everything I'd done up until starting my business was leading me here. My first job was working in the head office of Tesco.com – we were at the forefront of online retail, and ultimately I've ended up working online. I also managed and coached graduates in the year below me when I was at Tesco demonstrating my interest in developing people and coaching them. I then trained to be a teacher, which reflected my life-long passion for education (I'd envisaged myself as a teacher even when I was at primary school). The debating that I did at university was my first training as a speaker. I can see that it was all leading to where I am now.

Why am I telling you all this?

Because, even when your child feels lost and overwhelmed by the choices and possibilities in life everything they do is giving them either positive or negative clues about their future.

Even when your child feels lost and overwhelmed by the choices and possibilities in life everything they do is giving them either positive or negative clues about their future. Click To Tweet

I knew the corporate world wasn't for me (a negative clue) but there were things that I experienced there that I did want to keep, even if I didn't know it at the time (online business, coaching) – these were the positive clues. I loved teaching and working in education – a positive clue – but I felt like I was playing small in the classroom, both positive and negative clues.

If you can get your child to be reflective about their experiences they can start to build up a picture of what they do and don't enjoy and where that might lead them in life. This will also build their confidence as they have greater self-insight and they will be able to see what they are good at and could pursue into the future. Lack of confidence usually happens when someone just can't see themselves doing a particular thing – they know in their bones that it's not right for them, but they can't see any viable alternative.

The truth about motivation

Having said all of the above, ultimately motivation has to come from your child.

What can you do as a parent to unleash it?

You can provide inspiration and aspiration for your child. It was one day-trip to Cambridge that unleashed my intrinsic motivation when I was nine years old. I also remember going to the IMAX cinema in Bradford on a school trip and watching a film about astronauts – for a while I wanted to be an astronaut. It didn't last, but I was very motivated by this idea for a while. And, when you're thinking about exams in a few weeks or months time, it doesn't matter if your child's motivation doesn't last forever, so long as it propels them over the next hurdle.

So, take your child to inspiring places, get them to watch TV programmes about inspiring people, talk about how people you know have got to where they are in life. Unleash their altruism by getting them to think about the good they can bring to the world. Any or all of this could work.

As a parent, you're constantly trying to plant that one seed of inspiration that is going to grow and thrive as your child's instrinsic motivation.

Once that one seed has been planted, your child will take it from there and there will be nothing you can do to stop them.

Would you like 7 Top Tips for Parents to Help Your Child Reach Their Academic Potential? Enter your details below...

Just enter your name and email below and the free tips sheet will be sent directly to your inbox.