[64] Should you let your child fail their mocks? 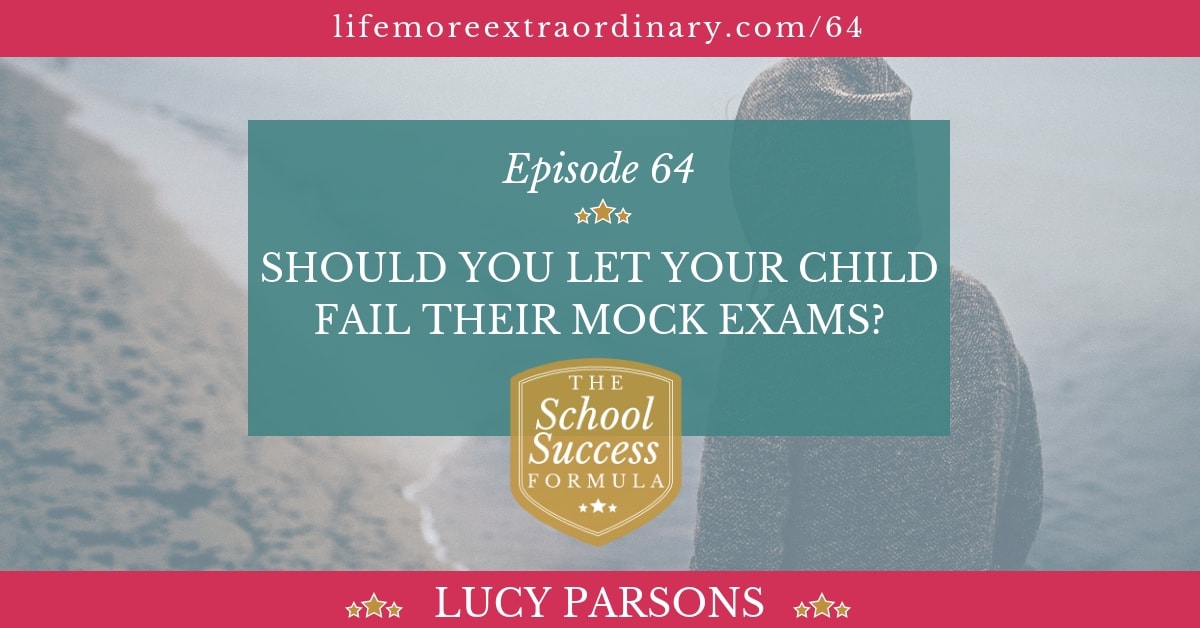 Failure is a scary thing. I'm pretty sure that you're listening to this podcast because it's your deepest desire as a parent to help your child to succeed. But, I've seen parents contemplating what to many is the unthinkable in recent weeks: letting their children fail.

Today, I'm going to talk about:

Why do we fear failure more than ever?

Back when I was at school in the 1990s most parents wanted their children to do well, but they didn't have the frenzied fear of failure that I see amongst many parents today.

There was a rather resigned attitude towards academic success which had its merits as well as it's drawbacks.

Most people seemed to think that you had to be gifted in some way to succeed. You were labelled as an ‘A grade' or a ‘B grade' student, in the same way that others were labelled as ‘having a good head for business' or ‘a natural bedside manner'. It just seemed like you were born that way and there wasn't much that you could do to alter your fate.

This is what the psychologist Carol Dweck would call having a ‘fixed mindset'. In some ways this fixed view of people's abilities was quite comforting – it allowed people to play safe and just be what they felt they were meant to be, staying in their comfort zone.

However, the big drawback was that people didn't push themselves to really test the limits of their abilities and see what they could achieve. There was the rare and occasional person who did, but it wasn't normal.

However, since then, a lot has changed in education.

With the rise of league tables, government targets, Tony Blair's desire to get 50% of all young people to go to university, Michael Gove's education reforms which made exams harder and a general feeling in society that there is greater competition for jobs because of the economic downturn and austerity there is so much more pressure on young people to achieve higher results. This has also been coupled with advances in the education world of psychological concepts such as growth mindset and resilience alongside improved teaching methods to get better results.

To a large extent, it has worked. But, it has also created a climate in which failure is demonised and feared.

Can failure be good?

I honestly believe that it can. But I want to qualify that.

We all learn fastest when we fail. I'll give you an example.

Last week I was on a coaching call with one of my one-to-one clients and he'd just had his half-termly report from his school. Unfortunately, he'd done really badly in a test for PE and we dived into what had gone wrong. It turned out that he'd misunderstood the exam technique for a twelve mark question, not realising he had to put real-life examples in to back up all his points. He knew real-life examples for all of them, he just hadn't realised he had to put them in. If he had known he'd have done well in this question, possibly getting full marks.

He's learned his lesson now and he won't fail at this type of question again.

But, this example is on quite a small scale. What I see parents considering most often is whether they should let their children fail their mock exams.

The costs and benefits of failure

When you're sizing up whether it's worthwhile letting your child fail, you really need to look at the costs and benefits of letting it happen.

Most of the parents who I see contemplating letting their children fail their mocks are at their wit's end. They've been cajoling, nagging and trying to help their children with revision for months on end – usually to be met with a silent wall of resistance or a child who's so laid back that they spend their whole lives horizontal. For these parents, they're so emotionally exhausted and so sick of the way that the mocks are creating a wedge between them and their children that the benefit of not nagging any more is huge. They also hope that by letting their child fail, they will actually enable them to succeed.

The idea here is that if you let your child fail at something that's not ultimately very important, like mocks, they will learn a valuable lesson for the actual exams. They will know that not doing the work doesn't work and they need to pull their finger out and put some effort in.

Indeed, I know of examples where students have excelled in their mocks and then backed off in their revision for the ‘real thing' and then been very disappointed by their actual results. Doing well in mocks is not always a good thing.

However, there are some students who really need to do well in their mocks to build their confidence and see that the work is worthwhile and will get the results they can be proud of. These are generally students who believe that they're not clever enough and no amount of work will make a difference (it will) or ones who are really suffering from anxiety and need that boost so that they start believing in themselves.

An example of this is one of the girls inside The Extraordinaries Club. She did my Revision Planning Kickstarter workshop for the November mocks and really focused in on her science. As a consequence, she raised her grade from a 5/6 at the end of year 10 to a 7/8 just a few months later in her November mocks. She's now beaming with pride and full of confidence about how working in the right way up until her exams will enable her to achieve her full potential in all her subjects.

Should you let your child fail their mocks?

Ultimately it's down to you, your child's character and your relationship with them. If nagging them to revise is doing your head in and ruining your relationship, they might just learn the lesson they need to learn by failing, and you'll have a happier home in the meantime if you back off. As they say, “Fail fast, learn fast.”

But, if anxiety is tearing them apart, helping them to see some success in their mocks is probably the way forward.

If you've fallen on the side of wanting to help your child succeed, then I'd like to invite you to take part in one of my Mocks Revision Kickstarter Workshops. During the online workshop, your child will create a complete plan for their Christmas holiday revision, including what they're going to revise and how they're going to revise it. I've had so much amazing feedback about these workshops over the years, including one mum who's son was suffering some mental health difficulties saying that it was ‘the best money she'd ever spent!”

How to make the most of your mocks

How to stop your mock exams ruining your Christmas holiday

Would you like 7 Top Tips for Parents to Help Your Child Reach Their Academic Potential? Enter your details below...

Just enter your name and email below and the free tips sheet will be sent directly to your inbox.