[53] Why we need to think differently about applying to Oxbridge 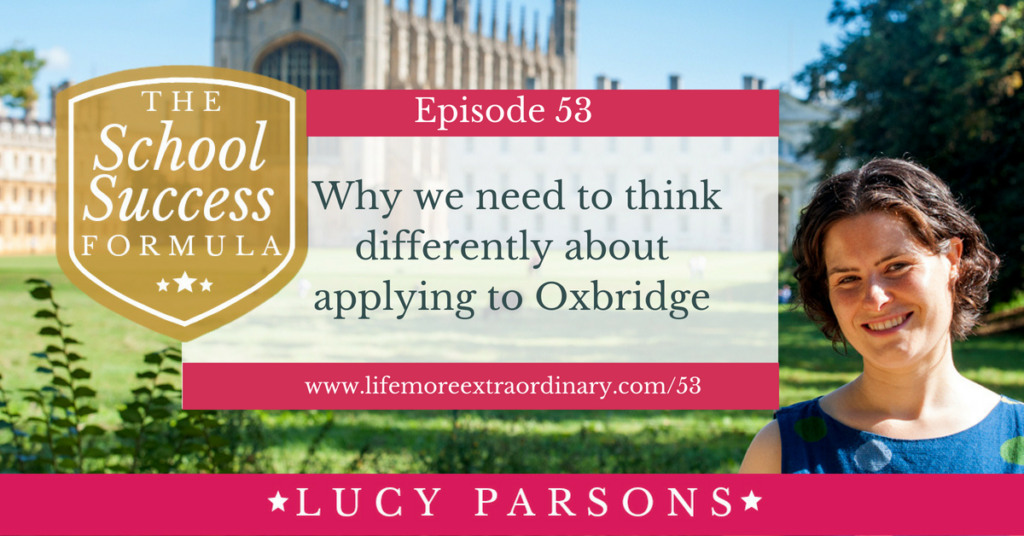 In recent years it has felt as if getting into Oxbridge has got even tougher. Don't get me wrong, it's always been hard with the demand for exceptionally good grades at both GCSE and A Level as well as a raft of high-calibre supra-curricular and extra-curricular experiences. However, in recent years I've seen students with exceptional grades and impeccable experience being rejected. In this blog post/ podcast episode, I want to explain what's behind these rejections and why I think we need to start thinking differently about Oxbridge applications.

Why is it getting harder to get into Oxbridge?

Let's take a look at the numbers.

As you can see in the table below, Cambridge applications reached an all-time high of 18,375 in 2018.

And, here's a graph showing the same data. 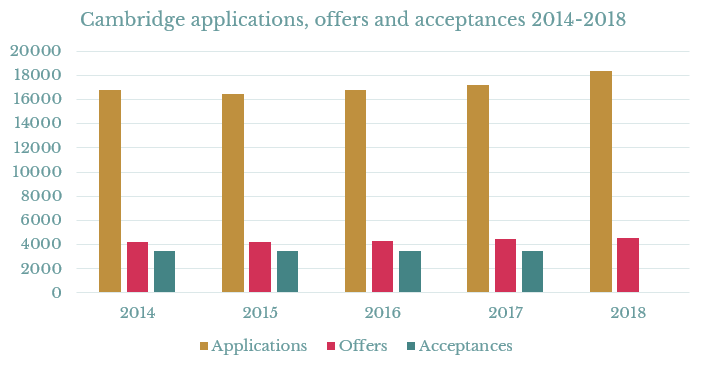 Similarly, Oxford applications also peaked in 2017, at 19,938 (this is the most recent year for which data has been made available). 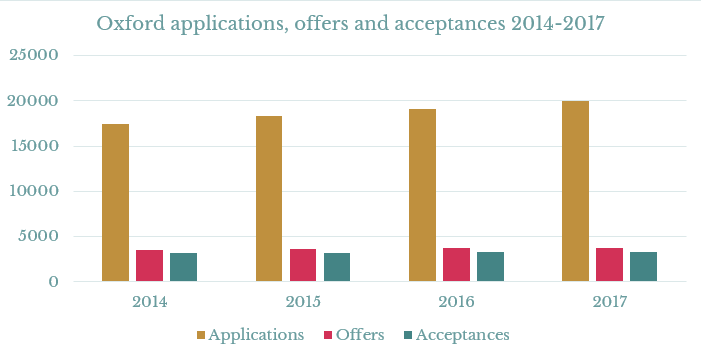 The graphs show that the percentage of offers to applications at both Cambridge and Oxford have decreased over recent years. For Cambridge, this has gone down from 20.99% in 2015 to 20.34% in 2017. 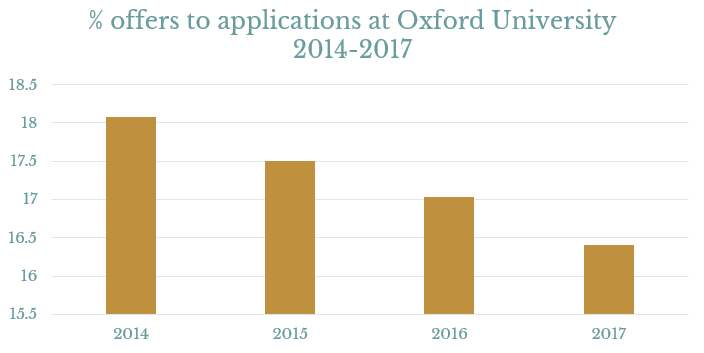 What these figures show is an increase in demand for places at Oxford and Cambridge, whilst the supply of places has barely increased. This is undoubtedly leading to many talented students, who would be good enough to both survive and thrive at these universities, being rejected.

Alongside this increasing demand for a limited number of places, the grades of applicants have also been improving. For example, at Cambridge, around 40% of applicants for science degrees who get A*A*A* accept a place at the university (i.e. they are given an offer and then get the grades to accept it). Students with A*A*A only had an acceptance rate of 8.5% in 2016 and 7.2% in 2017. With grades lower than this, the acceptance rate drops to below 1%.

Oxford doesn't offer this level of information about it's applications, offers and acceptances on their website. Although, they do say in their admissions report that:

Where applicants are coming from

So, overall, the competition for places from overseas at both Oxford and Cambridge is increasing, but that Cambridge is slightly more favourable to UK applicants than Oxford.

It's getting harder to get into Oxbridge

As you can see from the numbers alone, it is getting harder to get into Oxford and Cambridge. With increasing numbers of applicants overall, as well as more competition from overseas and only 40% of candidates with perfect A level grades (A*A*A* – and that doesn't mention those who have even more A Levels at the highest grades) it is tougher than ever to get into either of the UK's most esteemed universities.

What does this mean for prospective candidates?

You might have read through the above figures and felt really gloomy about your chances of fulfilling your dreams of a place at Oxford or Cambridge. However, I think we need to change our mindset about applying to these universities. And, I think with this change in mindset it might lead to more success.

What do I mean by a change in mindset?

Back when I applied to Cambridge in the 1990s it was very clearly my goal that I would get a place there. My application was thought of in terms of success or failure. This has also been the case for many students who I've seen through my teaching career and in my work as an academic coach. However, as I've seen talented students with exceptional grades who have done all the right things get rejected, and really struggled with their self-esteem and self-identity as a result,  I've come to the view that we need to change how we look at this process.

Even the highest achieving students need to start thinking of an Oxbridge application as ‘having a go' and ‘seeing what will happen'. It certainly isn't the be-all and end-all of a young person's life. As I've told parents in recent weeks, getting a place at Oxbridge shouldn't be seen as the icing on the cake. It should be seen as the cherry on the icing on the cake – it's a massive privilege and bonus.

What I hope is that as students free themselves up to think in these terms, they will be liberated to be more playful in their approach to their applications and their studies, rather than feeling crushed by expectation. As one A Level student with an offer from Oxford recently wrote to me:

I am doing my A levels at the moment and had my first exam today, however for the first time ever in an exam I couldn't relax once the exam got started and was anxious and panicky for the whole 2.5 hours, which made it extremely difficult to focus on the exam. Normally I am obviously nervous before an exam but I relax when I get in; today I just felt so overwhelmed and couldn't focus. I have got a conditional offer to study at Oxford, which could be one of the reasons why I am so nervous.

In my reply I said:

Oxford wouldn't have picked you if they didn't believe in you. See the offer as a vote of confidence and that might help you to relax.

I've said elsewhere on my blog, that you're a success even to be in a position to apply. If you've got grades, or predictions, in the ballpark that Oxford and Cambridge are looking for you're an incredibly talented student. It really doesn't help anybody to lay all this pressure on students to get a place, in such a competitive environment, and send them into such a state of stress that they can no longer feel the joy and flow of studying that has got them to the position where they can consider applying.

There's never been a better time to apply

You may think it's counter-intuitive for me to say this, but there has never been a better time to apply to Oxbridge for a certain group of students. These are students who attend comprehensive schools, are getting the necessary grades and have absolutely nothing to lose from their application. In the current climate, Oxford and Cambridge are bending over backwards to find ways to admit students from more diverse and less well-off backgrounds. If this is your background, I encourage you to throw your hat into the ring and give it a go.

There has never been a better time to apply to Oxbridge for students who attend comprehensive schools. Click To Tweet

Afterall, what's the worst that can happen? You end up going to a university that's probably just as good like Imperial, Durham or Bristol. And, where's the shame in that?

Click here to read my article about what it really takes to get into Oxbridge.

Change your Oxbridge mindset and free yourself up to succeed

What I'd like you to take away from this article is that by changing your attitude when you apply to Oxbridge you can actually free yourself up to succeed. This is a stark contrast to the oppressive feeling of stress that many students felt in the past, with the weight of expectation of their school and their family on their shoulders. As it's statistically less likely than ever that you'll get in, just have a go, have a great experience, have fun with it and see what happens. I'm pretty sure that if you free yourself up in this way you stand a much better chance of success.

By changing your attitude when you apply to Oxbridge you can actually free yourself up to succeed. Click To Tweet

Would you like my help with your Oxbridge application?

This year I am running a mastermind group for students in years 11 and 12 to help them with all the things they need to put in place, other than the grades, to stand a realistic chance of getting into Oxford or Cambridge. It's called The Top Ten Mastermind because it's for students of the calibre to get into Oxbridge, but in full acknowledgement of the spirit of this article, I am encouraging students to think more broadly than just Oxbridge. The things we'll be looking at are further reading, work experience, volunteering, personal projects etc. This is the kind of thing that is going to elevate you or your child to a higher level, and whether it results in a place at Oxbridge or not, it will make you (or them) a better candidate for other universities, jobs and life in general. As they say:

“When you reach for the stars you may not quite get one, but you won't come up with a handful of mud.” Leo Burnett

If you'd like to find out more check out my Top Ten Mastermind.

You can read more articles about getting into Oxbridge here.

My book, The Ten Step Guide to Acing Every Exam You Ever Take.